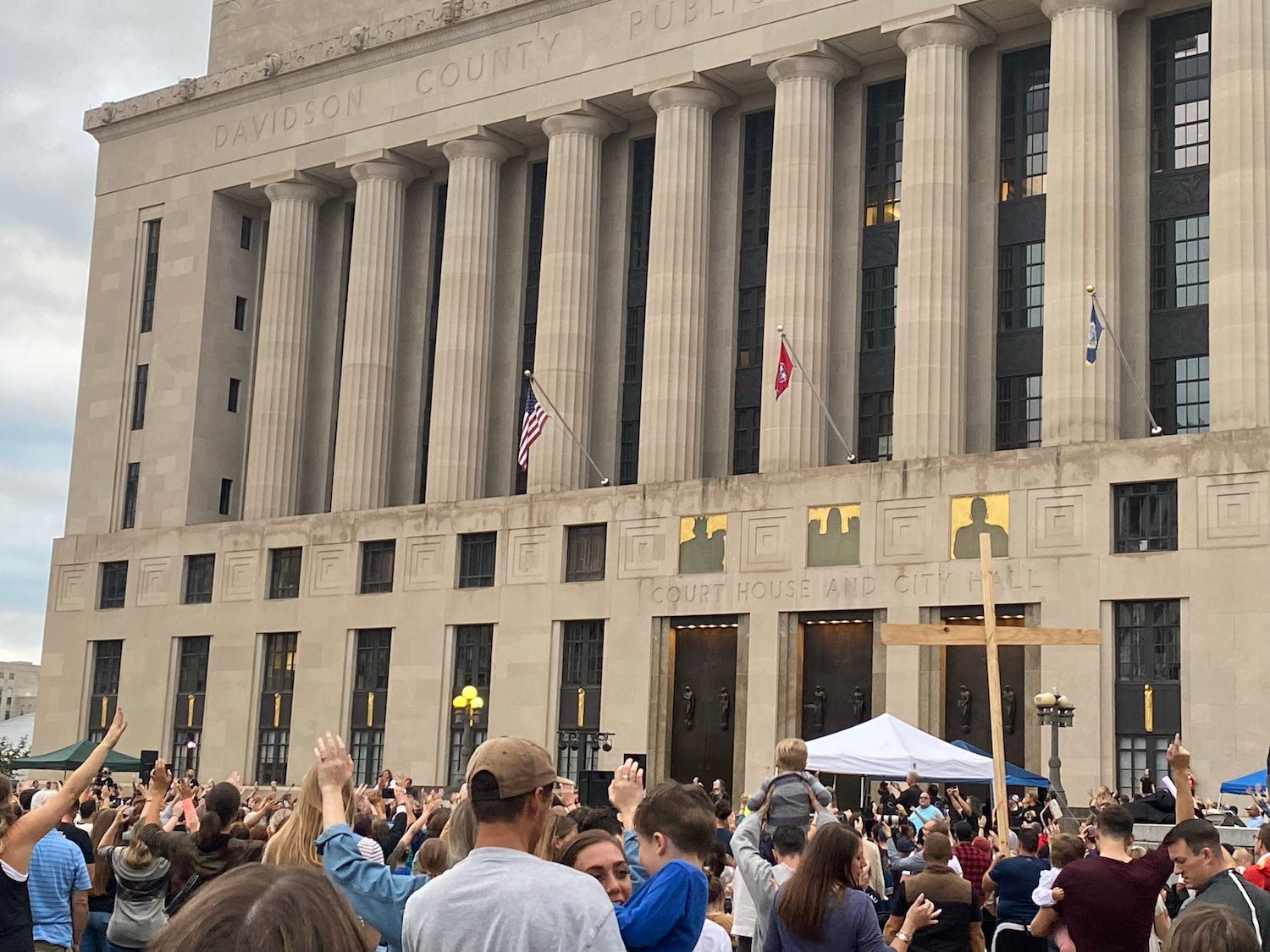 A video from an attendee shows a “worship protest” led by Sean Feucht in Nashville.

NASHVILLE, Tenn. – Christian worship leader Sean Feucht hosted a “worship protest” that is now under investigation by health officials after it drew thousands of people who appeared to be largely without masks in Nashville, Tennessee, on Sunday night.

Feucht, who is based in California and has amassed hundreds of thousands of followers across social media, posted a video of the gathering, saying the event faced resistance and had three venue changes before landing at the courthouse grounds.

“… BUT THE CHURCH WILL NOT BE SILENCED!” he said in a tweet on Monday.

Videos and photos posted by those who attended the event appear to show some people keeping a distance from one another, while others crowded together.

Nashville did not permit the event

Nashville officials said Monday morning that organizers did not apply for a permit to host the event and that the Metro Public Health Department is working to investigate what happened.

“We have worked very hard to slow the spread of COVID by taking a measured approach to protect the community,” an emailed statement from the health department said. “The Health Department is very concerned by the actions that took place at the event and we are investigating and will pursue appropriate penalties against the organizer.”

Dr. Alex Jahangir, leader of the city’s coronavirus task force, said the concert held Sunday was the exact kind of gathering that could damage Nashville’s progress against the virus, which the mayor often describes as “fragile.” Jahangir said he was unaware of the concert until Monday morning and said it was highly unlikely it was approved by city officials.

“Any time there are a lot of people together, without masks, I have concerns, and that holds true in this scenario,” Jahangir said. “From the pictures I saw online, good lord, did you see people wearing masks? I didn’t. That is not helpful to our cause.”

Makayla McKibben, 23, said she and several friends traveled from Chattanooga, Tennessee, to join the event. She said she heard about the gathering from Feucht’s social media and followed along with his previous events.

She said some of her friends chose to socially distance in the crowd, and others stood closer. She also said some chose to wear a mask, while others did not. She said she saw the night as an opportunity to express unity and exercise freedom to gather and worship.

“These events that are being held are considered a worship protest,” she said on Monday to the Tennessean, part of the USA TODAY Network. “Because it’s outside, if you want to make up your mind to stand far away or wear a mask &mldr; you get to choose.”

“Having an event like last night and making a stand as a church – people are going to see that. I want to be part of that,” she said.

Study: Moms infected with COVID-19 don’t need to separate from their newborn after birth

Expert: Gathering outside does not rule out risk

Dr. William Schaffner, a renowned expert on infectious disease at Vanderbilt University Medical Center, said the event is all but guaranteed to draw some attendees who were unknowingly infected with the virus. The transmission risk at the event was higher than normal because singing and shouting causes people to exhale more forcefully, which projects contagious droplets further, he said.

Based on the sheer size of the gathering, Schaffner said he could say with “100% certainty” the virus was spread at the event.

“Clearly, this is against all solid, science-based public health advice,” Schaffner said. “I recognize that it is outside, but nonetheless, this virus can spread in large gatherings even outside.”

Feucht’s events appear to be connected by his “Let Us Worship” tour across the United States.

He hosted a gathering in Atlanta on Saturday, and has plans to host several more in  Charleston, South Carolina; Kansas City, Missouri; Pittsburgh; and Washington, DC, in the weeks to come, according to his website.

He has drawn widespread attention – along with scrutiny – as he has hosted gatherings despite COVID-19 restrictions in recent months.

After Feucht invited people to an outdoor event in Redding, California, on July 22, city and county leaders expressed concern over the safety of the gathering. At the time of the event, the state allowed indoor and outdoor worship gatherings, but only if safety measures – like keeping six feet of distance from anyone not in your immediate household – are kept.

Redding Police Chief Bill Schueller said in July that he was “deeply concerned” by the failure to follow the guidelines at the event.

Gatherings in Salem, Oregon; Fort Collins, Colorado and West Palm Beach, Florida, in recent months stirred similar concerns – along with baffled responses as to why Feucht’s gatherings were allowed while many others were restricted.

In Salem, city officials said they were aware of the event but gave no answer on what enforcement would be taken to stop violations of the governor’s orders.

In Fort Collins, the city didn’t issue a special event permit for the gathering, and event organizers didn’t request one, city spokesperson Amanda King told the Coloradoan of the USA TODAY Network.

West Palm Beach did not issue a permit for Feucht’s event, on the grounds that it was framed as a protest, not a recreational event.

Nashville priest: ‘It’s the irresponsibility that I find appalling’

Father Thomas McKenzie, of Church of the Redeemer in Nashville, said the event left him feeling unsettled.

“When any protest includes people in close proximity, not social distancing in a time of global pandemic, that’s irresponsible,” he told The Tennessean on Monday.

McKenzie said he learned of the gathering via social media after the fact. Further, he said that coming to Nashville – a city that has allowed worship gatherings – made it feel like “a slap in the face.”

“For this guy to come into town and start what is potentially a superspreader event and do it in the name of Jesus and say he’s protesting so we can worship is foolishness,” McKenzie said.

“If he could do something like this responsibly? Totally fine,” he said. “I don’t blame the people who went. I understand that. But it’s the irresponsibility that I find appalling.”