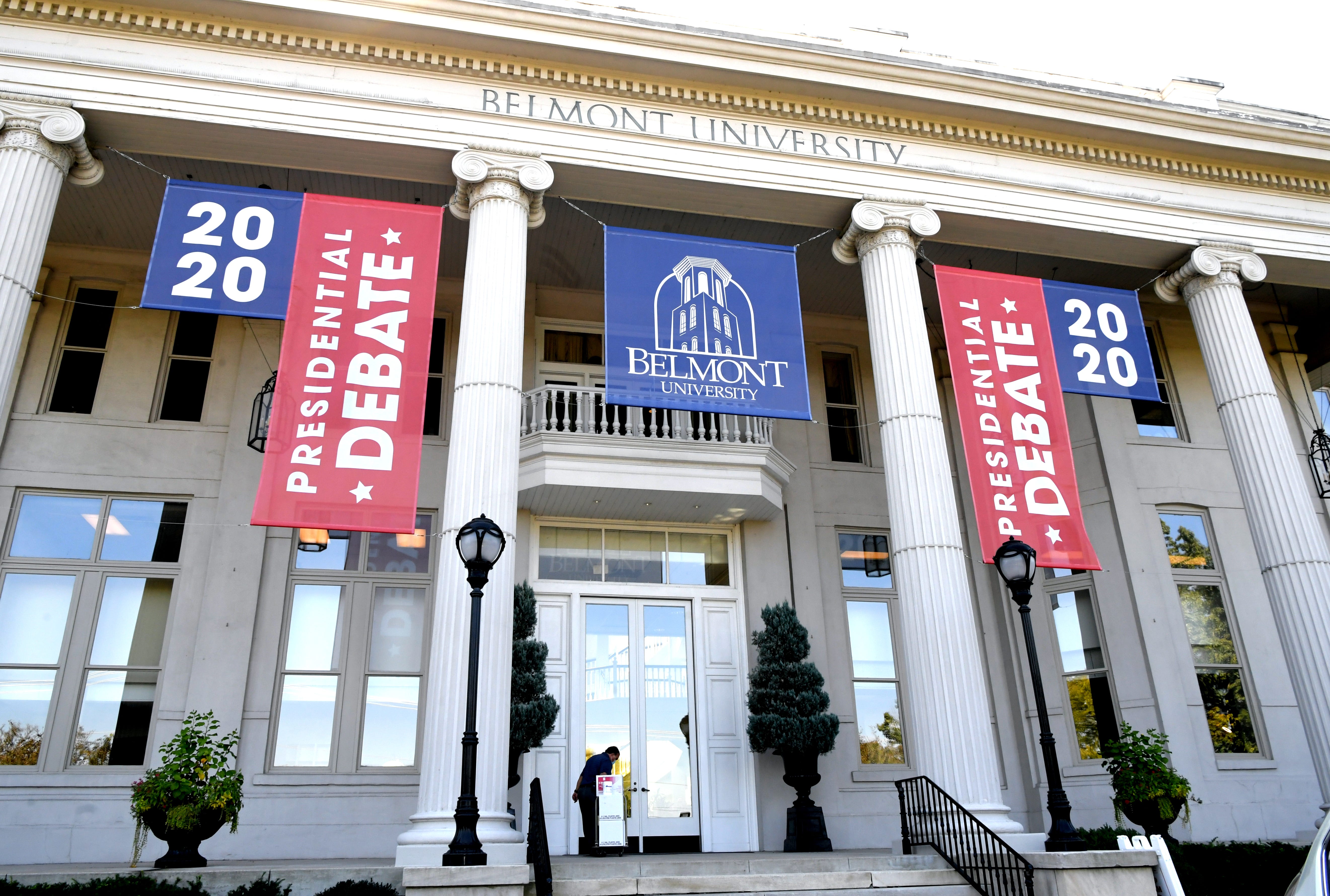 Preparations have begun for the October 22 Presidential Debate where former Vice President Joe Biden and President Donald Trump will debate for the last time before the November election.

There are glaring examples of how the debate Belmont University is scheduled to host next week will be drastically different than the last time around.

There’s the deeply fraught political climate in which the 2020 presidential race exists. A president who had his own bout with a pandemic illness. The question of whether speakers and audience members should wear masks. A moratorium on large events.

The Oct. 22 showdown between President Donald Trump and former Vice President Joe Biden will unquestionably feel much different than when, in October 2008, Democrat Barack Obama and Republican John McCain took the stage at Belmont.

But even without a pandemic, the debate this time will take place in a fundamentally different place.

Belmont’s enrollment numbers, academic programs and profile have soared since the private Christian university earned a place in the spotlight in 2008.

Nashville’s tourism, hospitality and business growth in the years that followed made the mid-sized Southern city a major contender both for national events and vacations.

And Tennessee — which a decade ago was still a competitive environment for Democrats and Republicans seeking state office — has since that debate become one of the reddest states on the map.

It’s been a dozen years, after all.

Belmont’s debate event center put it on the map

Belmont University president Bob Fisher was still new on the job, taking over the reins of the small, private Christian school while making plans for how he would raise its profile.

He invited over for lunch music label executive Mike Curb, the former lieutenant governor of California who had also served as Ronald Reagan’s national campaign co-chairman. The two men had never met.

In the Belmont president’s office, they had “one of those Mike Curb lunches” lasting upwards of three hours, Fisher recalled, a conversation that turned to Fisher’s first big project: an event center.

The two men left Fisher’s office and walked over to the school’s gym and parking lot, the site where the $55 million facility would ultimately be constructed.

“Imagine it,” Fisher said. “The Curb Event Center. Belmont versus Vanderbilt in basketball.”

“LeAnn Rimes, live from the Curb Center,” Fisher tried again, and Curb perked up at the idea of one of his label’s artists performing in a venue bearing his name.

Fisher joked that the space could even be used for a presidential debate.

“Imagine this,” Fisher continued. “You turn on your TV just a few years from now, and a guy comes on and says, ‘Good evening, this is Jim Lehrer from the Belmont Curb Event Center,'” describing a live broadcast from a 2004 televised debate.

Curb’s eyes shifted from looking at Fisher to looking out over the site, entranced by the thought.

“How much would that cost me?” he asked.

The pair agreed that Curb could pay it over the course of a few years. They had a deal — and an expectation that the university would give its all to make the dream of hosting a presidential debate a reality.

“That changed everything for us,” Fisher said of the arena, which would go on to host events like the 2006 CMT Music Awards. “That was like the first moment I realized, ‘Hey, we can be somebody.'”

The 2008 debate was a game-changer for Belmont, an unprecedented event for the university that Fisher describes as “a magical moment.”

The next year, the school saw a “double-digit increase” in deposits, Fisher said.

In 2008, a university hosting the debate had to pay $750,000 to the Commission on Presidential Debates, though that didn’t include all the other events and activities Belmont put on that drew attention — bringing Ken Burns and David McCullough to campus or taking national reporters on a tour of the Ryman Auditorium. The price was worth it for the publicity, Fisher said.

This time around, Belmont’s baseline fees to the debate commission were much higher, at $2 million.

Anecdotally, Fisher knows from conversations with new students’ parents that the last debate was critical in raising the university’s profile.

But in Nashville, the wheels were already in motion for massive growth that would come to fruition not long after the debate.

The city years before had commissioned a study on building a large convention center, a project Mayor Karl Dean championed upon taking office in 2007. By early 2010, the $600 million Music City Center project had been approved by the Metro Council and would open its doors in 2013.

Visitor spending in Nashville shot up from $3.9 billion in 2008 to $7.5 billion last year, while the Nashville Convention and Visitors Corp. reports that the number of tourists nearly doubled during that time, from 8.5 million to 16.1 million.

While Nashville had already been home to Bridgestone Arena and Nissan Stadium for roughly a decade, the city wasn’t close to being a regular contender for major events.

“We weren’t looking at things at the level of an NFL Draft or World Cup,” CVC president Butch Spyridon said of the state of the city’s capacity to hold major events back in 2008.

A Major League Soccer franchise arrived in Nashville this year, and the city is now one of 17 locations FIFA is eyeing for the 2026 World Cup.

“We were not as used to receiving national attention as we are now,” Dean said of the city in 2008. “Nashville hadn’t gone through that moment yet where everybody suddenly woke up and realized it was great place to live and great place to visit. We hadn’t made all the lists.”

In 2008, Tennessee wasn’t yet completely a red state

At the time a few thousand national and international political reporters gathered in Belmont’s massive media tent in October 2008, Tennessee was a state where Democrats were still in play.

The election that would take place weeks later sealed the fate for the indefinite future of Tennessee Democrats’ waning influence.

“Before the election in 2008, you could still call Tennessee a purple state,” said Adam Kleinheider, who at the time covered the debate for his blog Post Politics, part of the Nashville Post. “Not only have we gone from purple to red, our red has become a deeper hue.”

While the state in a presidential race had not gone to a Democrat since Bill Clinton in 1996 — and Tennessee’s own Al Gore, a former vice president, lost the state by four points to George W. Bush in 2000 — Democrats prior to 2008 were still competitive in other races, holding on to a portion of the state’s political power.

At the time of Nashville’s first presidential debate, Democratic Gov. Phil Bredesen was in his second term and the Tennessee legislature was still half-controlled by Democrats.

Weeks later, Republicans would take over the state House of Representatives by numerical majority, two years after the Senate elected its first Republican speaker since Reconstruction.

By 2012 — just four years later — both chambers of the state legislature had a GOP supermajority that continues today, taking out Democrats across rural Tennessee and shoring up support for conservative social legislation and opposition to Medicaid expansion.

The process of Tennessee becoming a solidly red state was already under way by 2008, but the GOP used Obama’s election as one of its primary weapons to deal a devastating blow to the Democratic Party in the state.

“Obama was an unpopular liberal president, and Republicans were able to seize on that by tying local Democratic candidates to the unpopular president,” Kleinheider said.

Dean, the city’s mayor at the time of the first Belmont debate, pointed to the fight over an English-only referendum held soon after.

Days after Obama was sworn as the country’s first Black president in January 2009, Nashville voters went to the polls for a referendum on whether English should be the only permitted language for government business in the city.

The measure was defeated, and the failed referendum in many ways solidified Nashville’s trajectory of emerging as a booming progressive city.

But there had been plenty of uncertainty ahead of the vote, Dean recalled. Proponents of English-only thought it could win. Opponents were nervous about the outcome.

Had it passed, “a lot of good things wouldn’t have happened” in the city, Dean said.

“The city came together in a great way to beat that,” he said. “I think that was just a sign that Nashville was looking forward. We never looked back after that.”

But the business growth, and even a city government that became more progressive, has not translated to a better way of life for everyone.

“It’s a shame that not everyone benefited from Nashville’s growth and prosperity,” said Charlane Oliver, co-founder of The Equity Alliance. “It’s just not been a prosperous time for a lot of people. As you can see, the city is broke. We can’t even pay for basic city services, and our residents are the backbone of these services.”

A Metro Council report earlier this year found city employees, including firefighters, police officers, bus drivers and general workers, did not receive cost of living raises in six of the past seven years, despite soaring housing prices.

Since 2008, Nashville teachers haven’t received raises seven of those years.

Odessa Kelly, director of Stand Up Nashville, noted the growth downtown and in adjacent areas has been built around the wealthy white demographic. Whereas she and her friends used to enjoy nights out at downtown clubs and entertainment venues in the mid-2000s after college, the culture the city center has built itself around in recent years hasn’t factored in people of color.

Popular Black entertainment venues Limelight near downtown and Agenda in the Gulch have shuttered in the last few years as a flood of new businesses geared toward honky-tonking tourists have opened.

Nashville neighborhoods that for decades were occupied by Black homeowners have been taken over by younger, white, wealthier people.

“There’s nothing for me to do downtown unless I am going to intentionally insert myself into a culture I’m not comfortable in,” Kelly said. “There has been a boom of people moving here. Let’s be honest — how many of those individuals are people of color? Especially African Americans?

“Yet if you were to reverse it and talk about the people who are moving out of the city, I think that becomes a compelling number to look at.”

Dean acknowledges that Nashville has become more progressive in recent years. He suspects if Nashville focuses on “quality of life,” it will continue to attract new technology and financial companies and remain “appealing to young people all over the country.”

“I think what Nashville has going for it is Nashville is perceived as a city of the future,” Dean said. “I think we’re going to continue to remain successful at attracting good future-oriented businesses.

As for what’s next for Belmont and how much of a boost hosting the scaled-back debate will provide for the university this time around, Fisher isn’t sure. If nothing else, he said he feels strongly it will increase the value of Belmont graduates’ degrees.

Fisher said he has “a peace” about what will happen with the logistics of the debate.

Mostly, he’s grateful Belmont, in the midst of a tumultuous year, is a university playing debate host again rather than “sitting on the sidelines.”

“I’m just really happy that we’re doing it,” Fisher said of the debate. “I wouldn’t want it to be anyone else besides us.”