As Tennessee in recent weeks has lost much of the ground gained on its coronavirus outbreak, Gov. Bill Lee on Tuesday doubled down on opposing a statewide mask mandate — instead launching a new ad campaign emphasizing Tennesseans’ “choices” about wearing facial coverings.

“Our ‘Choices’ PSA reminds Tennesseans that we all have choices to make that either help or hurt our efforts to mitigate the spread of the virus,” Lee said in a virtual briefing with reporters while quarantining in his home following an exposure to COVID-19 last week from a member of his security detail.

“Masks are one of the many tools outside of social distancing and other tools, and this PSA will highlight that.”

For the first time, however, Lee said he is urging county mayors in locations with the worst outbreaks to implement a mask mandate. Previously the governor has stopped short of that step, insisting only that local leaders should make the decision for themselves using the emergency authority he has granted them to require masks.

He said earlier that morning, he had a call with a county mayor about doing so.

Lee’s renewed refusal to mandate masks comes as Tennessee sees the coronavirus outbreak grow by virtually every measurement. After flattening throughout most of September, the virus has spread steadily in October, with the most alarming signs coming from rural counties. 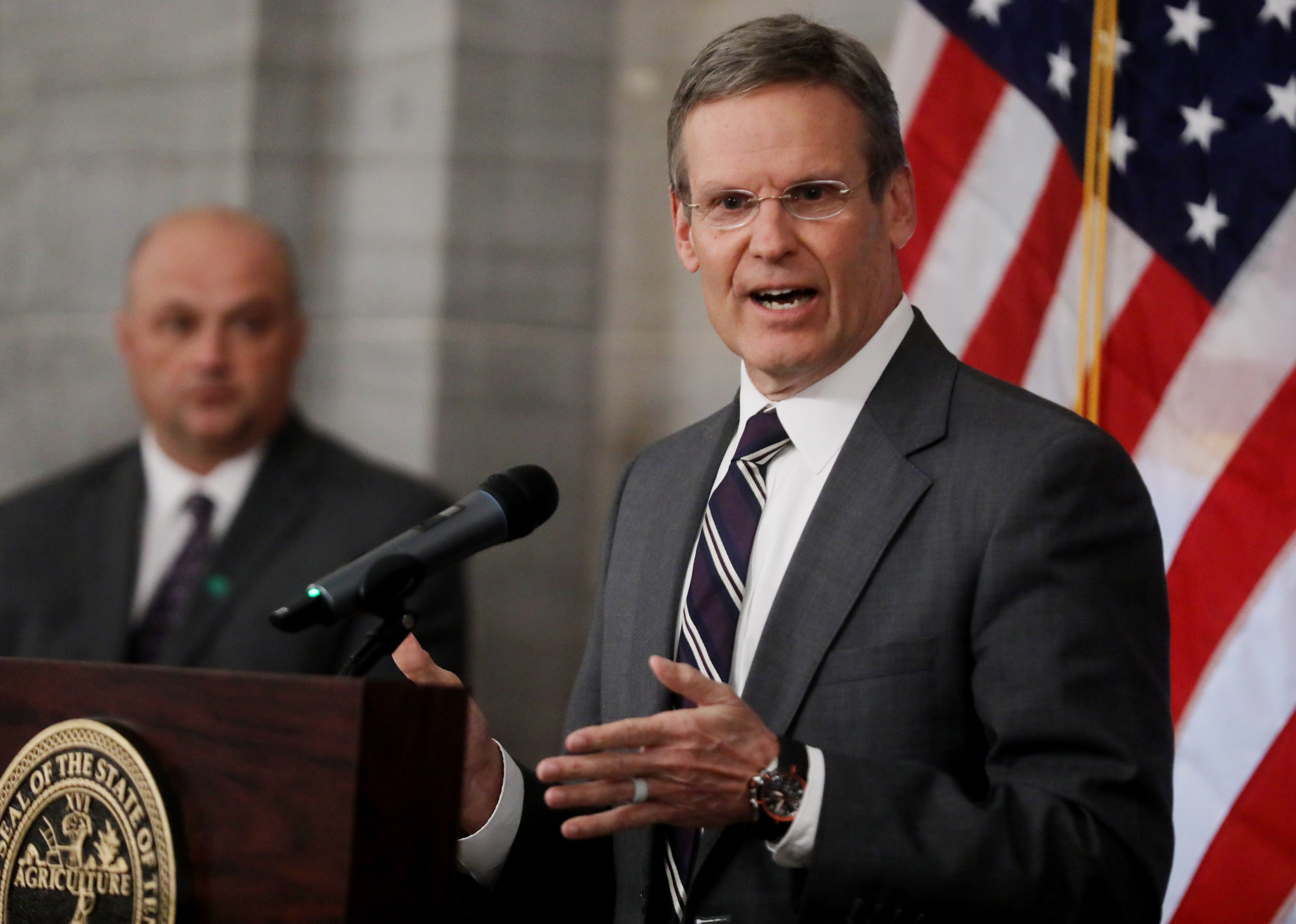 On Sep. 18, the Tennessean reported the state’s active infections was inflated by about 40% at the start of September.

But unlike this summer, when Dr. Deborah Birx during a visit affirmed the governor’s decision to leave mask decisions up to county mayors, Lee no longer has the White House’s support on the matter.

In an Oct. 11 report released privately to state health officials, the White House wrote that “a statewide mask mandate must be implemented” in Tennessee to curb the growing spread of the virus, the Associated Press reported.

Tennessee’s new infections and active infections have increased by 45% and 63%, respectively, since Oct. 1. The state’s average test positivity rate, which accounts for spikes and drops in testing, rose from 6.5% to 8.7%. More Tennesseans are currently hospitalized with the virus than ever before.

More: Gov. Bill Lee removes all business restrictions, but says state of emergency will continue as long as feds have one

As of Tuesday, 62 of Tennessee’s 95 counties were reporting weekly positivity rates above 10%, which is the White House threshold for a coronavirus “red zone.”

In the 10 counties with the highest positivity rates, only one — Henry County — currently has a mask mandate, according to a review of county websites and local news stories.

Tennessee’s positivity rate falls roughly in the middle when compared to all 50 states plus DC, according to data gathered by Johns Hopkins University.

Tennessee’s positivity rate sat at 11.3% after the state released its latest numbers on Tuesday afternoon. It ranks similarly to Wisconsin (12.6%), Florida (12%) and Montana (10.2%), according to Johns Hopkins. As of Tuesday morning, it logged Nevada, South Dakota and Idaho with the highest positivity rates in the nation at 46%, 37.2% and 28.7% respectively.

The new advertisement, the state’s third COVID-19 related marketing attempt, will air statewide on television. Lee’s office in July launched an earlier ad encouraging the wearing of masks, while the governor continued to maintain that Tennesseans’ voluntary buy-in of facial coverings would be more effective than requiring that masks be worn.

Using federal coronavirus relief funds, Tennessee is spending just under $1 million on the campaign: $91,750 on production costs and a media buy of $900,000, according to the governor’s office.

Asked whether it was a valid choice for someone not to wear a mask, Lee said it is “not a responsible choice if they’re in a situation where they can expose someone to the virus or be exposed themselves.”

The governor also announced he will extend by executive order county mayors’ ability to implement mask mandates through at least the end of the year.

In addition to growing statewide, the coronavirus outbreak appears to be specifically surging in Nashville for the first time in months.

At the start of October, the city’s key virus measurement had fallen to low points — about 100 new infections per day on average and a positivity rate of above 3.5%. These average have since increased to about 150 infections per day and 5.6%. The city reported 444 new infections on Thursday, the highest daily total since mid-July, when the outbreak was still surging in the city.

“Unless we act now to curb the transmission rates in Middle Tennessee, we expect this trend to continue,” the joint statement said. “A major surge of new COVID-19 cases could threaten our ability to serve patients with many diagnoses requiring hospitalization.”

The joint statement urged Tennesseans to “remain vigilant” in their efforts to wash their hands, wear masks, remain socially distant, avoid large gatherings and get a flu shot.

During a press conference last week, Nashville Mayor John Cooper said the city was in a scenario very similar to its position in mid-June, immediately before the outbreak surged in July.

“This is pivotal moment, but we’ve been here before and we know things changed quickly,” Cooper said. “Earlier in the summer, our metrics were also going in the wrong direction and our daily cases jumped from 200 to 400 in just a couple of weeks. This time can be different.”